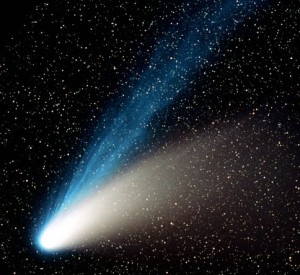 Comet Hale-Bopp was discovered on July 23, 1995 independently by amateur astronomers Alan Hale and Thomas Bopp of the USA. At the time, the comet was around 7.2 astronomical units (AU) distant from the Sun which is somewhere between Jupiter and Saturn. This made it the farthest distance from Earth at which a comet was discovered by amateur astronomers. Undiscovered comets are scarcely discovered by amateurs at such distance because they are normally extremely faint. Hale-Bopp however already had a coma at this stage. After further observation, the reason for  this was realised when the comet’s nucleus was estimated to be around 60 kilometers diameter.

Comet Hale-Bopp became known as the great comet of 1997 becoming one of the most widely photographed, observed and talked about comets of recent times. Despite there being brighter comets before it and after, Comet C/1995 O1 (Hale-Bopp) captivated the world. There are a few reasons for this fame. Aside from its brightness, the most poignant factor was to be the comet’s persistence. The comet reached naked eye visibility in the May of 1996 and remained within naked eye visibility up until it reached conjunction with the Sun in December. After its reappearance, the comet remained a naked eye object throughout early 1997 through closest approach to Earth on 22 March and perihelion on 01 April, 1997. The comet exceeded predictions after perihelion as it reached magnitude zero and developed two very clear and bright tails of which the dust tail stretched across 40 degrees of the sky. Anybody could see it if they looked up in the right direction, even from light polluted cities. The comet was visible in daytime hours during a total solar eclipse on 9th March in China, Mongolia and Siberia. At the time, the internet was still a growing phenomenon and it played a role at inflating the already high media coverage. Final naked eye observations were reported in December 1997 making it visible for a little over 18 months (by far the longest on record).

Why was it so spectacular?

Probably the main reason that Hale-Bopp stayed so bright for so long was its size. The comet’s nucleus is thought to be a whopping 60km wide. By comet standards, this is big. The longest section of Halley’s comet by comparison is thought to be around 15km wide.

Another factor of Comet Hale Bopp’s brightness would be its orbit. The comet has a long period orbit (currently of 2533 years). Its orbital period changes on each passage around the sun as it comes within close proximity to the likes of Jupiter that can change the comet’s orbit (usually shortening it). However, the comet still remains a long period comet meaning that it spends a long time frozen out there in space. This in turn helps the comet keep a stable and strong structure during its perihelion passage around the sun. The comet’s orbit is also quite far out of the plane of the solar system. This placed the comet reasonably high up in the sky after perihelion keeping it out of the sun’s twilight glare.

Despite the visual magnitude not being exceptional compared to other great comet’s before it. These factors mentioned above resulted in a well deserved title of ‘The Great Comet of 1997’. Here’s hoping that the 21st century can produce another like this.

Where is Comet Hale-Bopp Now?

Located in the constellation of Octans at a distance of around 39.5 AU*, Hale-Bopp is now roughly the same distance from the Sun as Pluto*. Still being tracked to this day two decades later, it is expected to remain visible to large ground based telescopes until around 2020 when it is expected to have faded to magnitude 30. The comet’s orbit takes it 370.8 AU from the Sun at its furthest point.

*Due to the motion of the Earth’s orbit relative to the comet, this distance fluctuates by around 0.3AU.