2016  started with what will probably be its brightest comet encounter for the year with Comet C/2013 US10 Catalina. The comet started the year visible in the early hours shining at around magnitude 6. It then faded but was still visible in binoculars throughout January in Ursa Major. Conveniently heading to an almost circumpolar position making the comet visible in the evenings and early hours too.

So what’s next for 2016? Are there any more naked eye comets on the horizon? Not as many predicted as in 2015, however there are a couple comets that may reach binocular visibility.

At the beginning of the year, comet 2013 X1 PanSTARRS was at magnitude 9 and well placed for northern sky observers. Possibly somewhat overlooked due to Comet Catalina’s presence.The comet moved rapidly southward and was not be visible for Northern observers by the end of February. The comet then headed in to the Southern sky observable between April to September reaching a possible maximum 6th magnitude in June 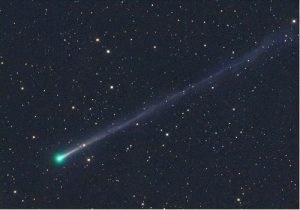 This short period comet is expected to reach closest approach in 2017 of a distance of 0.08au. The comet will rapidly brighten throughout November 2016 however only visible to Southern sky observers. Northern observers may get a change at the end of the year as perihelion approaches. It’s predicted to reach magnitude 7. Imaged above on its last closest approach in 2011, this comet has had a few close encounters with Jupiter in the past making some noticeable changes to the comet’s orbit.