One of the simplest ways of categorising comets is by their orbital period. In their most basic categorisation, they come in two flavours. Short period comets and long period comets.

Non-returning long period comets can be categorised further. Their orbits can be parabolic or hyperbolic.

A parabolic orbit is when the object has just enough escape velocity (speed against gravitational pull) to escape its gravitational influence (i.e. our sun). They will never return to the solar system unless influenced by another object sometime in the future in such a way to do so. It’s for this reason that the object’s orbit is incapable of being circular or an ellipse.

A hyperbolic orbit is when the object accelerates considerably more past it’s escape velocity resulting in a much straighter path line than a parabolic orbit.

Below is an illustration of the orbits… 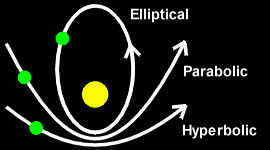