The visual brightness of comets are measured by the visual magnitude scale. It can sometimes be referred to as the ‘apparent’ magnitude scale as it is always based on an object’s brightness as viewed from the Earth. This is the same scale that is used for all astronomical objects from asteroids and meteors to planets, moons, galaxies and spacecraft. There are a few peculiar characteristics of the visual magnitude scale. The first thing that may seem a little odd for a scale is that the lower the number, the brighter the object is. Compared to many other measuring scales, this seems backward. The second characteristic is that each increase in integer represents an increase in brightness of 2.5 times. For example, an object of magnitude 5 is two and a half times the brightness of an object of magnitude 6.

To help get a better understanding, see the chart below of common astronomical objects and their typical magnitude. Some objects have a variable brightness depending on their orbital position relative to the Earth.

If you go to the current visible comets page, you’ll now be able to get an idea of how bright current observable comets are at the moment by looking at the mag column in the table.

Objects that are points of light such as stars or planets work well with the visual magnitude scale. However, large or diffuse objects can sometimes distort how bright the object actually ‘looks’ compared to its designated magnitude value. 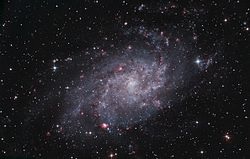 This is especially true for large, face-on spiral galaxies such as the Triangulum Galaxy (m33), which has a magnitude of 5.73. This galaxy is exceptionally hard to see with the naked eye despite being well within the naked eye limit of magnitude 6.5. A star of magnitude 5.73 by comparison would be reasonably easy to see with the naked eye. The reason for this is that the magnitude value of an object is based on the amount of light emitted across the whole object. The Triangulum Galaxy is quite a large object in the sky and the light measurement is taken from the spread of the whole object. Through a telescope, the galaxy can also be hard to spot as it’s almost like your looking through the object rather than at it.