Comet 2P/Encke is a short period comet that graces our skies every 3.3 years. It was the first periodic comet discovered after Halley’s Comet. The comet is the source of the Taurid meteor shower that occurs every October/November. Encke last reached perihelion (closest approach to the sun) in November 2013. With a nucleus of 4.8km, the comet next reaches perihelion on 10 March with  a fairly respectable visual brightness of magnitude 7.  Positioned in Pisces throughout February for northern observers, the comet will quickly brighten making it visible in binoculars by mid month. The comet will then move rapidly in to Aquarius and sink in to northern dusk by early March. Planet’s Venus and Mars will be positioned in the same area of Pisces low in the West. For the first half of February, Venus will reach just shy of 5 degrees of the comet. These will be good pointers to the area of the sky where the comet lies. By the end of the month however, the planets will have climbed  several degrees away from the comet. 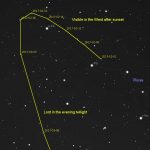 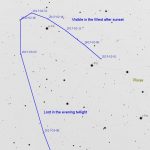