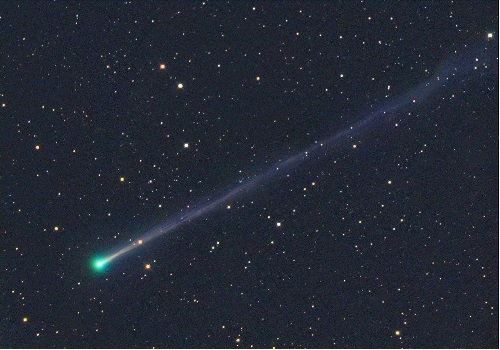 Discovered in December of 1948 by Moniru Honda, this comet is named after Minoru Honda, Antonín Mrkos, and Ľudmila Pajdušáková.

The short period comet is expected to reach closest approach in 2017 at a distance of 0.08au. It will brighten rapidly throughout November 2016, however will only be visible to southern sky observers. Northern observers may get a chance at the end of 2016 as perihelion approaches before it re-emerges in the Northern hemisphere in February. The comet will then become a morning object all the time progressively increasing in altitude. On 11th February 2017, the comet will reach closest approach to Earth and is expected to reach magnitude 6.5* by which time will be visible from midnight onward in the constellation of Hercules. 45P then continues its rapid movement, (visible for most of the night), in to Bootes, Coma Berenices and on in to Leo in March by which time the comet will have faded to approximately magnitude 12. *UPDATE: Since conjunction, the comet has not reached a visual magnitude of 6.5 as was expected. The comet also seems to have lost its majestic tail.  Click below to see the comet’s current live position.

Imaged above on 45P’s last closest approach in 2011, this comet has had a few close encounters with Jupiter in the past making some noticeable changes to the comet’s orbit. Throughout January and February 2017, it is expected to reach magnitude 6 covering plenty of ground as it moves rapidly through Capricornus, Aquilla, Hercules, Corona Borealis, Bootes, Coma Berenices and Leo where it will remain throughout March. By this time, it will have faded to around magnitude 10 unless anything unexpected happens.