Comet C/2015 V2 Johnson is visible throughout May as it moves from Hercules in to Bootes all the time picking up relative speed across the night sky. This is an ideal location in the sky residing well above 70 degrees for most of us. Currently at magnitude 7, this comet is an easy binocular target once the sky gets dark (bearing in mind twilight is getting later and later at this time of year). Observing will be difficult over the next few days as we get past full Moon on 11th, then the Moon will rise later and later through the month as it wanes. By the 20th May, the Moon is well out of the way not rising until an hour before twilight.

Many amateur astronomers choose to image the comet, some choose to observe in a telescope or hunt it down in binoculars. Which ever way, get out there and see it while you have the chance. June tends to be a wash out when it comes to astronomy due to the long summer days. This comet will take a nose dive in to the Southern hemisphere by the end of July. 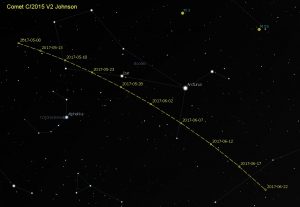 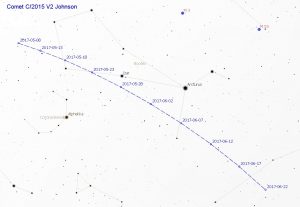