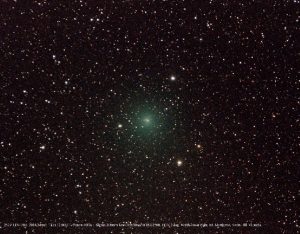 On March 21st, Comet 252p/Linear made a close approach to Earth at a distance of only 0.036AU (33.5 Million Miles). This makes it the 5th closest cometary approach to Earth on record! Normally a dim comet, Linear’s rapid brightening has surprised everyone’s expectations. It is now an easy target for backyard telescopes and binoculars on the edge of naked eye visibility.

According to the International Meteor Organization, there’s a chance that the comet’s approach could cause a weak meteor shower between 28th and 30th March. The radiant would be near the star μ Leporis and the meteors are expected to be very slow at a rate of possibly 5 to 10 per hour.

On Monday, 252P/LINEAR will swept through the Southern constellations of Triangulum Australis and Apus, far south of the celestial equator. Unfortunately it was not visible from the Northern hemisphere.