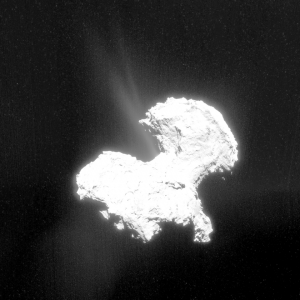 Comet 67P, officially known as Comet 67P/Churyumov-Gerasimenko, has been made famous by the ESA’s Rosetta mission. Launched on 02 march 2004, the Rosetta spacecraft took off on top an Ariane 5 rocket. It took a 10 year trip to finally reach its target on 06 August, 2014. History was made on 12 November, 2014 when the Rosetta spacecraft successfully deployed its lander, the ‘Philae’ probe on to the surface of the comet with a soft landing. Despite difficulties in communicating with the lander,  failure to anchor in the right place and loss of power, the fact that Philae had landed successfully  is a true technological feat.

As a result, this is without doubt the most detailed study of a comet ever undertaken.