“746 hours of searching since my last visual comet discovery in 2010 and on Nov. 7.53 UT I visually discovered my 12th comet and today it was confirmed”

C/2018 V1 is currently residing in Virgo at visual magnitude +9 with a condense 4 arcmin coma and a short tail extending westward. The new ice rock is located about 20° in altitude just before morning twilight near Gamma (γ) Virginis (Porrima). 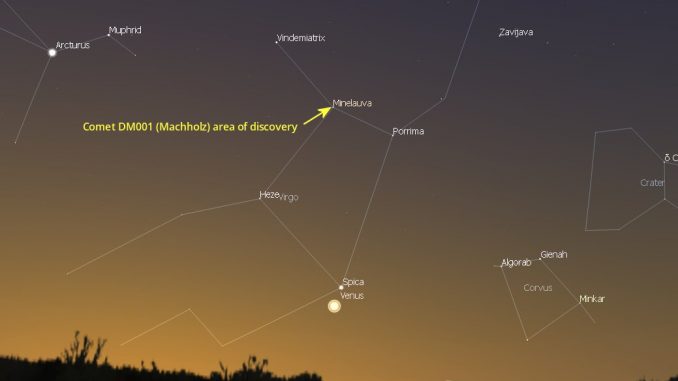 Comet discoveries by amateur astronomers are becoming more rare nowadays what with so many professional sky surveys up and running such as PanSTARRS and the Catalina Sky Survey. This results in most newly discovered comets being designated these peculiar names rather than being named after individuals.

As the newcomers’ discovery is so fresh, the orbit is still being calculated. The latest observations suggest that DM001 is approaching perihelion and will brighten, but is likely to remain close to the Sun making observation a little tricky. The object will switch to an early evening object possibly reaching naked eye brightness but all the while moving low in to a brightening Western sky. These are only predictions at the moment and may change as observations and calculations of the comet’s orbit continue.