As much of the media have reported, on the night of November 14th, a ‘Super’ full Moon will rise visually being the biggest and brightest for nearly 70 years. There have been a few reported ‘Supermoons’ in recent years including one coinciding with a total lunar eclipse in 2015. But what is a Supermoon? Are the media misleading us by using this term?

What is a Supermoon?

Put simply, the astronomical event that many in the media like to call a Supermoon is when a full Moon coincides with a Perigee Moon. The proper terminology for this is a perigee-syzgy full Moon. The Moon is at Perigee when it reaches it’s closest point to Earth in its orbit. As the diagram below illustrates, the Moon’s orbit around the Earth is slightly elliptical. Most full Moon’s occur at other points along the Moon’s orbit where it may not be located at its closest point to the Earth (or may be at its farthest point ‘Apogee’). But approximately every 14 full Moon’s occur during Perigee, a ‘Supermoon’. This equates to about once every 13.9 months so it’s hardly a rare event. 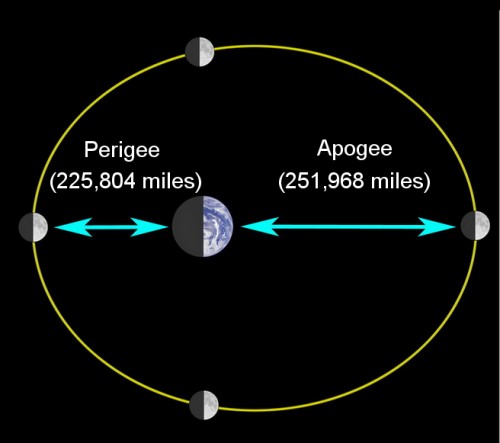 What about the full Moon on November 14th?

So is the full Moon on November 14, 2016 the closest since 1948 with the next not being this bright and big until 2034? Well, it depends on a couple of things. These measurements are made from the center of the Earth to the center of the Moon. So the location of your observing site on Earth can make quite a difference to the true distance between your location and the Moon. If you lived on the equator looking at the Moon when it is directly overhead, the Moon may be closer to you than if you were viewing the Moon from Leeds, UK when it is at it’s highest point in the sky. The reason being, the equator may be slightly closer to the Moon than locations in the Northern or Southern hemisphere for example. These distance variations although very small, do make a difference to the Moon’s apparent diameter in the sky. These differences are enough to make a mockery of these claims that the full Moon on 14th November is the biggest and brightest that viewers may see compared to other perigee-syzgy full Moons.

Another factor to take in to account is that the Moon may already begin moving away from the Earth at the point that it rises at your location. Or it may still be moving towards the Earth having not reached its closest point. For example, viewers in the UK will not be able to see the Moon on the 14th November when it actually reaches point of opposition to the Sun (13:52pm), as this occurs before moonrise in the UK. Granted, the Moon will still very much look like a full Moon but it will have already past its true full Moon phase by the time it rises anywhere in the UK. The main point to make here is that the difference between the supermoon’s of 1948, September 2015, November 2016, January 2018 or even 2034 are so small that you wouldn’t visually notice the difference.

So is it all a hoax?

Not really, it depends what you’re expectations of a ‘supermoon’ are. A supermoon certainly won’t fill up half of the sky or cause terrible tides. Not to put a downer on things however, all is not lost. There is a clear visual difference between an apogee full Moon and a perigee full Moon. Most especially if you catch the moonrise while it’s low on the horizon and the ‘Moon illusion’ comes in to play. A real hoax is one such as the famous ‘Mars will look the same size as the Moon’ report which was simply a mis-understanding of a statement made for the 2003 close approach. The supermoon event is not a hoax by comparison. 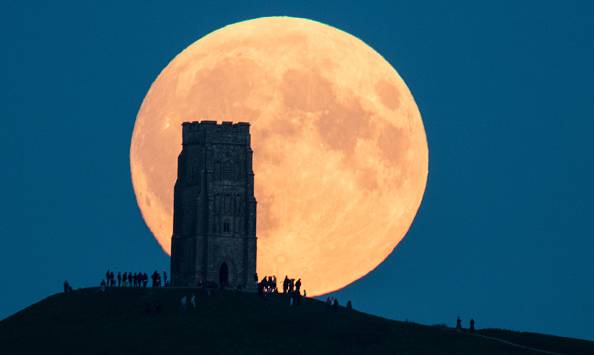 The full Moon of 14th November will be an impressive sight at moonrise, no doubt about it. The  ‘Moon Illusion’ is where buildings and area’s of land are in the foreground showing just how large the Moon actually is in the background sky.  The bottom line is that the full Moon on November 14, 2016 will be bigger and brighter than most other full Moons in the year. Below is an illustration to show the apparent size difference of apogee and perigee Moon’s. If the sky is clear on the night of the 14th November, get outside and look on the eastern horizon shortly after sunset. 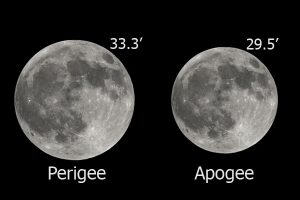 What time is Moonrise?

As with all full Moon’s, they occur when the Moon is on the opposite side of the sky to the Sun (As the full Moon is simply a reflection of sunlight off of the Moon’s surface). So the rule of thumb is that the full Moon always rises during and after sunset. In the UK, the Moon rises between 4:45pm and 5:10pm on 14th November (depending on location). The further East you are, the earlier moonrise will be within these times. The Moon will rise on the eastern horizon.