In the Spring of 2017, two reasonably bright comets are gracing our skies as they carry out their separate journeys through the solar system. Although the comets will be approaching the Sun from totally different orbital planes, in April 2017 they will appear in the same area of sky. Comet 41P/Tuttle-Giacobini-Kresak is a short period comet that reaches its brightest and closest approach to Earth towards end of March at an estimated magnitude 5.

Well, placed and visible in the evenings in the North Eastern sky throughout April, the comet sweeps through Draco down in to Hercules. Meanwhile, a hyperbolic comet is also residing in Hercules, namely Comet C/2015 V2 Johnson. This comet will not yet have reached closest approach or perihelion, however, it is expected to reach a respectable magnitude 7.5 by the end of the month. The two comets are separated by a little over 11 degrees on 14 April. Not close enough to be seen in the same binocular field of view however a great widefield photo opportunity in mid-April. 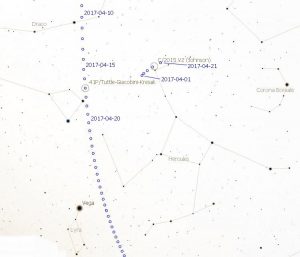 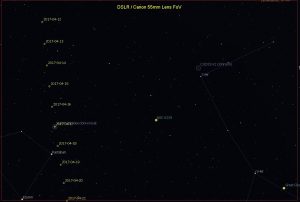